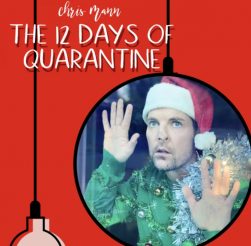 Chris Mann's new release, a parody on "The 12 Days of Christmas," generated some of the largest fan engagement ever for the singer turned viral comedy star.
LOS ANGELES - eMusicWire -- https://www.youtube.com/embed/NYFpugeUso8


LOS ANGELES, CA (November 30, 2020) –  The 12 Days of Quarantine, the latest release from Singer-songwriter, actor, Chris Mann, became an instant viral smash this weekend, generating some of the highest audience engagement yet for the comedy star on-the-rise.  As fans took time out of from their Black Friday shopping to spread the video across the cyber space, it rapidly gained nearly 200,000 unique views per day across social media, hundreds of re-posts, and thousands of comments. Even "The Shark Tank" start up, Tipsy Elves, whose sweaters Mann wears in the video, took note after one fan's post captioned, "This Tipsy Elf Can Sing!" amassed 22,500 views in a matter of hours.

More on eMusic Wire
"2020 has been a burning trash dumpster of a year," said Mann, whose viral videos and unique style of musical parody meets current events commentary, generated hundreds of millions of views this year, "Now it feels like the holidays are all messed up too. People are bummed out and I want to cheer them up," Mann continued, "Also, the list of insanity that has happened on top of the pandemic this year is just nuts. The only thing to do at this point is try to laugh at it all—from masks and rubber gloves, to Harry leaving the royals and panic disorders, and if laughter really is the best medicine, then I sure hope The 12 Days of Quarantine works…even though we're actually on day 248."

A tik tok challenge is planned to be announced later this week, where fans will have the chance to create an interactive version of "The 12  Days of Quarantine," alongside Mann.

ABOUT CHRIS MANN:
Mann was recently featured in the LA Times Sunday edition, which was also featured online and nationally syndicated. Chris' parodies have been featured on news outlets all over the world including The LA Times, Today Show, NPR, CNN, Funny or Die, BBC News, VICE, The New Yorker, Yahoo! and more. The holidays have always been busy for Mann, the original Glee cast member and star of The Voice, who has performed at two Obama White House Christmas Specials alongside Conan O'Brien and Ms. Diana Ross, was the featured performer for the Macy's Tree Lighting in Washington, D.C., and performed at New York City's famed Christmas in Rockefeller Center Concert.