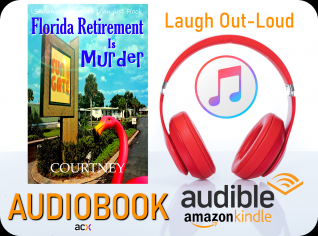 Produced on ACX, an Amazon Company and distributed through Audible, Best Selling Author Kris Courtney has released his Fictional Satire Mystery on Digital Entertainment as an AUDIOBOOK.  Free Sample and Promotional Downloads are ready on multiple platforms that include Amazon, iTunes and all Apple devices!

Florida Retirement Is Murder has become the Breakout Fiction for Cozy Mystery reads in 2023 since its release on New Year's Eve - December 31st, 2022. Fans from across the Globe are enjoying the Kindle, Paperback and Hardcover with sales reaching over 50,000 pages reviewed!  With the expanded reach now of an audible version that is being translated for sale in UK, FR & DE through ACX media channels.

More on eMusic Wire
As described, Florida Retirement Is Murder is a collection of Hysterical Characters and a sleuth journey of overgrown dysfunctional children in a Gated Florida Retirement Community that 'Will have you Laughing Out-Loud!

As stated by the Artist:
"Mari Oyaizu Carson is a theatrical designer and voice artist living in Northern California. She likes knitting and cats. She hates writing bios."

Her voice, flexible language and vocal control makes this #Audiobook on track to be 'The Best Satire Audio Novel of 2023'

Florida Retirement Is Murder
Snowbirds do more than just Flock

If you have ever thought about becoming a Florida Snowbird, you have to read this book!
This colorful story will fit perfectly on every shelf and screen.
Great Summer Beach Book!
Laugh Out Loud – Hilarious cast of characters.