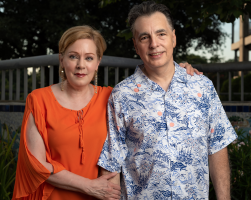 Gospel Blues Duo Celebrate Their Third Consecutive Josie Music Award Nomination
GULFPORT, Miss. - eMusicWire -- Paula and Harold Vega Vondenstein, of Bible Belt Blues, have received a Josie Music Award nomination for their much-acclaimed 2nd album, "My God, My God" which was released on June 1, 2019. This is their third consecutive year to receive a Josie Music Award nomination with the stakes much higher this time with 38,000+ submissions across all genres from around the globe. The Josie Music Awards are celebrating their 7th year as the most prestigious red carpet award ceremony for Indie artists and will hold this year's event at the Country Tonite Theatre in Pigeon Forge, Tennessee on September 18, 2021.

Everything about Bible Belt Blues' music is counter-culture from producing music that addresses sin, repentance, and salvation to preserving a style of music that many people say is a dying art, early Mississippi Bentonia blues. All of their songs on their Josie Music Award nominated album "My God, My God" have already received radio airplay with the exception of one song. Despite the fact that WNIR Radio is a secular radio station, Bible Belt Blues' music has placed on their Top 10 Monthly Chart for eleven consecutive months during 2020. Bible Belt Blues was also the inspiration behind the creation of WNIR Radio's new Christian program, "Spirit & Soul." Known for their bold, Biblically-sound lyrics, Bible Belt Blues is setting the stage for a new wave of Christian music crafted to be an evangelical tool where the lyrics take center stage.

More on eMusic Wire
After winning the coveted Josie Music Award for Gospel/Christian Duo on September 21, 2019, Bible Belt Blues has gained tremendous momentum with twenty six of their songs having received radio airplay, extensive media coverage including magazine articles, song reviews, interviews, and the signing of eight of their original songs with Bongo Boy Records in four compilation albums.

Most recently Bible Belt Blues won the 2020 W.A.M. Music Award for Best Lyrics for Gospel/Christian Song, "We Worship the King of Kings," and two Finalist 2020 InterContinental Music Awards for Best Gospel/Christian-America for their songs "Are You Ready?" and "Down the Rabbit Hole."

More on eMusic Wire
Bible Belt Blues released four new songs in 2020 and their latest single, "Unstoppable" was just released on May 20, 2021. The Vondensteins are currently working on completing their 3rd album, "Preacher and the Bluesman." www.BibleBeltBlues.org