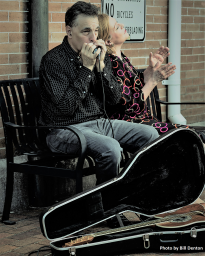 Award Winning Gospel Blues Musicians Perform Songs to Facilitate Healing, Restoration, and Renewal
GULFPORT, Miss. - eMusicWire -- Bible Belt Blues, award winning gospel blues musicians from Gulfport, Mississippi will host a Free Live Concert Event, "Story Behind the Song" at Gulfport Little Theatre on Sunday, February 9, 2020 from 2:00-4:00 pm. This live concert event by Harold and Paula Vega Vondenstein will showcase fifteen of their original Bible Belt Blues songs from their two newly released Christian albums. The concert is free and donations will be accepted at the event and on their website: BibleBeltBlues.org. Physical CDs of their two albums will be available for purchase. Register on Eventbrite to receive your tickets which will be sent by email.

More on eMusic Wire
What goes on behind the scenes of a husband and wife music ministry team when the wife is the lyricist, vocal coach, and producer? Paula Vega Vondenstein, lyricist for Bible Belt Blues, will take you on an unforgettable journey into the creation of some of the most powerful Christian lyrics written today. Bible Belt Blues' Live Concert Event, "Story Behind the Song," is reverential, remorseful, relevant, and surprisingly funny at times. The captivating performance by her husband, Harold Vega Vondenstein, is reminiscent of early Mississippi Bentonia blues with its wailing harmonica and gritty guitar picking. As Harold's vocal coach, Paula soon discovered that the full range of Harold's voice was a perfect fit for the full-fledged repentance and church revival songs for which they are known. Bible Belt Blues' songs are bold and biblically sound like nothing you have ever heard on Christian radio or in churches these days.

Paula Vega Vondenstein is the visionary, lyricist, and producer for Bible Belt Blues, a music ministry she founded with her husband, Harold, in September of 2018.  During 2019 they released two Christian albums, "I'm Not Ashamed to Be a Christian" and "My God, My God" which they created, recorded, mixed, mastered, and produced in their own home recording studio. Against all odds, they won the coveted 2019 Josie Music Award for Gospel/ Christian Duo after more than 23,000 nominations were submitted across all genres from around the world. As Christian musicians, they have dared to go where many Christian musicians have dared not tread: to address sin, repentance, and salvation in their songs. Amazingly, sixteen of their original twenty three songs have already received radio airplay thanks to Bill and Kat Radio's Cross 104 Gospel Blues Hour Syndicated Program, WQFX Power Gospel Radio, Country Blast Radio's Multi-Genre Hour, and BWH Music Group's WNIR Radio. The Vondensteins are working on their third album while seeking bookings for live concert events at churches, theatres, and colleges.