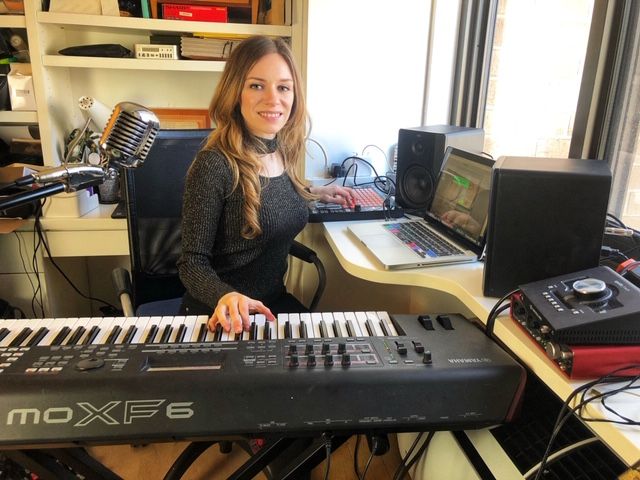 NEW YORK - eMusicWire -- The phenomenon of the bedroom music producer selling instrumental tracks online (a.k.a. beatmaker) has disrupted the music industry.  Aspiring music artists now scour YouTube for beats made by these beat makers to write to with the hopes that their collaboration will become the next big hit.  However, music production is still a male dominated field.  Some female music producers like multi-instrumentalist and singer/songwriter, Julie Schatz, are jumping in to disrupt that pattern and forming alliances with other female beat makers.  Producers like Julie represent the women beat makers and songwriters who are working to be heard among the predominantly male music hit makers of our generation.  On her YouTube channel, Julie Schatz Music, Julie gives her beats away for free and posts educational content to inspire other female musicians to create beats.

We live in an era where an American teenage boy can buy an instrumental track online from a young producer based in Europe and write a cross-genre massive song that ends up beating out the Mariah Carey and Boyz II Men "One Sweet Day" hit from the 90's for longest running #1 single on the billboard charts.  This song was none other than "Old town road" by Lil' Nas X and took the world by storm last year when it went viral on TikTok, catapulting the unknown rapper into fame from a song he wrote over a beat he bought on YouTube.

More on eMusic Wire
So, what exactly is a beat?  It's basically the instrumental track behind the songs you hear on the radio, or more apropo to today, the songs you stream on Spotify.  The creators of these beats are everyone from the top music producers working out of state-of-the-art recording studios to young kids on their laptops sampling other songs and finger drumming on a drum pad into their laptops.  The latter was the force behind the beat that Lil Nas X wrote his "Old town road" hit to.   And with the current crisis caused by the coronavirus, bedroom recording has become even more relevant as professional studios have been forced to close.

Many independent music producers sell their beats directly on YouTube, through their own website or through a third-party site such as Beatstars while other producers allow their beats to be downloaded for free.  The technology of being able to produce a song in your bedroom has caused a serious industry disruption of online beat makers standing at the forefront of creating hit records.  In a musical world dominated by YouTube and streaming where the zeitgeist first and foremost goes online for their music consumption, you never know where the next greatest star in music is going to come from.  We've actually seen an emergence of a whole new musical genre called "bedroom pop" where musicians of all levels are posting musical videos with high quality audio right from their bedroom and can gain an audience seemingly overnight.

More on eMusic Wire
Nevertheless, one aspect that has not changed much within the music industry is the dominance of producers and writers overwhelmingly being male.  A USC Annenberg study from last year showed that the ratio of male to female producers among 400 popular songs was 47 to 1.  On the positive side, the phenomenon of bedroom beat making has opened the door to change in the world of male dominated music production.  Female musician/beat maker, Julie Schatz, has been inspired by the many other beat makers who started out in their bedrooms making beats for the love of music, knowing that as a young producer keeps putting out music "they will only get better and better at their craft and could one sweet day be the next force behind a song that goes viral".  Other female music producers are making sure their voices are getting heard within the music production community as well.  Female Music Producers World, for example, is an Instagram page dedicated to highlighting the work of female producers, songwriters and musicians and the extensive strides they are making within the music industry, often independently.  The women running this page recently launched the #wearehere movement to counter the notion that women may just simply not be putting in the work for their music to be recognized.

So, if you believe in revolutionizing the music industry with some good old female empowerment, start by subscribing to some female beat maker pages like Julie Schatz Music.  Who knows, maybe we will witness the next Lil Nas X phenomenon but this time they'll be saying "it all started with a free beat, and this one broke another record - the beat was made by a female producer!"