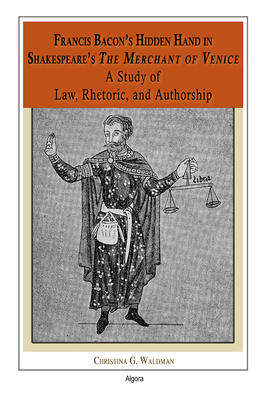 Waldman's book explores Bellario and all things related: who is he, why is he in the play, and what can we learn from him about law and Shakespeare? But the story starts much earlier.

In 1935, a law student (who later became an Assistant Secretary of the Navy under President Truman and an industrialist), Mark Edwin Andrews, suggested a connection between Francis Bacon and Bellario. He based this on two things: the abundance of precise legal terms which the playwright used correctly; and, the uncanny real life similar role Bacon played in 1616, twenty years after the play was written in 1596-98, in solving a major conflict between the English courts of law and equity for King James.

In 1935, Andrews, a Texas law student, was taking a summer Shakespeare course at the University of Colorado from Princeton's Prof. Duncan Spaeth who suggested he take two weeks and write a paper on Shakespeare's use of equity in The Merchant of Venice.

There were two competing legal systems in 16th century England, law and equity. Each had its own courts. Back in 1935, it was more common to find a United States law school teaching equity as a legal system than it would be today. Most states have merged law and equity into a single system. The word "equity" can have a variety of meanings, including basic fairness.

Andrews' manuscript was rediscovered in library storage and published in 1965 as Law versus Equity in 'The Merchant of Venice' (Boulder: University of Colorado Press, 1965). Waldman saw this book in her college library at Southern Illinois University around 1980, filed with the dissertations. Andrews had paraphrased Act IV, Scene 1, the famous trial scene, translating it into modern courtroom language--not to detract from the poetry, but to assist in its understanding.

More on eMusic Wire
When Waldman realized from Andrews' presentation just how much law there was in that scene, she became convinced that, whoever Shakespeare was, he had to have been a lawyer. She never forgot that book.

Thirty-five years later, she set out to write a brief review of Andrews' book for SirBacon.org, a website devoted to sharing information on Francis Bacon, particularly as to authorship. Just as Andrews' "two-week" paper turned into an 88-page book, so Waldman's "short book review" turned into a 310-page book.

For her research into Bacon and law, Waldman studied the writings of Daniel R. Coquillette, Professor of Boston College Law School and Visiting Harvard Law School Professor. Modern attention on Bacon as a jurist had been scant, until Prof. Coquillette's book, Francis Bacon, appeared in 1992, published by Stanford University Press. In addition, Waldman relied upon Prof. Coquillette's articles on the influence of the civilian (Roman) law on English common law lawyers of the 16th-17th centuries.

For many years, the question of who wrote the plays of Shakespeare was considered closed: it was William Shaxpere of Stratford, of course! However, that is changing. In 2019, Routledge published Dr. Barry R. Clarke's book, Francis Bacon's Contribution to Shakespeare: A New Attribution Method (London: Routledge Studies in Shakespeare, 2019), with a foreword by British actor Mark Rylance.  https://www.crcpress.com/Francis-Bacons-Contribution-to-Shakespeare-A-New-Attribution-Method/Clarke/p/book/9780367225445.

More on eMusic Wire
Elsewhere, scholars have explored the possible contributions of other candidates, including John Florio; Roger Manners, the 5th Earl of Rutland and his wife Elizabeth; and Emilia Lanyer Bassano, a mistress of Lord Hunsdon's.

"Orthodox" Shakespeare scholars generally no longer contest the fact that the plays are full of legal allusions and references. In addition, they now concede there has been collaboration by a number of playwrights on several Shakespeare plays.

Francis Bacon's Hidden Hand may be purchased from Algora Publishing, https://www.algora.com/545/book/details.html, Amazon https://www.amazon.com/Francis-Bacons-Hidden-Shakespeares-Merchant/dp/1628943300, and other sellers.