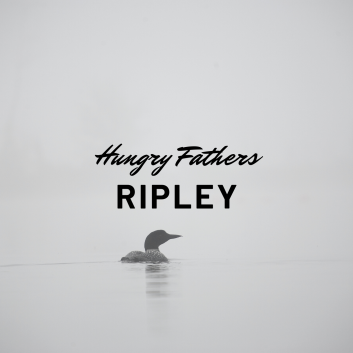 CHICAGO - eMusicWire -- The Chicago rock band Hungry Fathers announce the release of their second album, Ripley. The new record follows their 2008 debut — also released during a financial crisis — Will the Lightning Bug Return?

The long-awaited (by the band members) new album is named after a charming lake in Cambridge, Wisconsin, where the group convened for long weekends twice a year from 2009–2018 to rehearse the songs and record them on singer/songwriter Ben Beckstrom's laptop computer.

"It was an old computer when we started. And it just kept getting older over the years. It was pretty much crawling by the time we finished. I thought we were going to lose everything! All the data, I mean." Ben's bandmates and good friends Brian Grant, Dave Youngberg, David Oliver, Linc Abbey, and Sten Anderson agree: "Yep," they said.

Final editing and polishing were done by old friend Mark DeVos, who mixed and mastered the recordings on a Cuisinart® 2-Slice Classic Metal Toaster. "Toast 'em till they're done, then toast 'em a little MOH-A," he was fond of saying. Although the band never quite understood what he meant, they acknowledge that he made the album sound much better. The group have already planned a 2020 world tour with the following schedule:

Ripley is composed of ten tracks reminiscent of the Beatles, Xtc, David Bowie, Talking Heads, and the band that did "Bittersweet Symphony" (I forget the name) — but obviously lower quality, since these guys don't play a lot.

The opener "Robots or Rock Stars" tells the story of — well, it's not clear. Something that occurred in 1982. Or 1985. It's about a band, I guess. But the Fathers weren't even born yet, were they? We kid: they are all middle-aged. The album closes with "10 Seconds," which is about the end of the world. Honestly, the timing couldn't be worse.