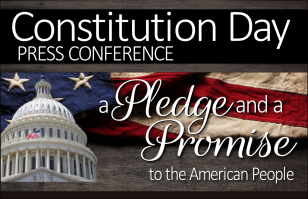 Moms for America to present the Gold Star Pledge signed by members of Congress reaffirming their oath to defend the Constitution, secure the Republic and stand boldly against socialism.
WASHINGTON - eMusicWire -- Moms for America® to hold press conference with members of Congress on Constitution Day to continue what they started on July 4th with the Gold Star Rally for Freedom. Gold Star Wives and Mothers spoke at the Rally in July, joined by Emmy-Award actor Jon Voight, to celebrate the freedom their family members paid the ultimate price for and stand boldly against the radical socialist agenda being promoted by some members of Congress.

Moms for America® will be joined by members of congress to present the Gold Star Pledge  in honor of these families and the members of Congress who sign it. Several members of Congress have signed including Senators Ted Cruz and John Cornyn from Texas. The list of signers is updated as members sign.

More on eMusic Wire
Kimberly Fletcher, president of Moms for America® said, "The one thing we heard from these Gold Star Wives and Mothers over and over again was their husbands, sons and daughters gave their lives for freedom and they expect members of Congress to honor their sacrifice by preserving the freedoms they paid the ultimate price for. This Pledge clearly identifies those members of Congress who are committed to protecting the Constitution and securing our Constitutional Republic so many have given their lives for."

The Pledge, titled "A Pledge and Promise to the American People" states:

In recognition of the tremendous sacrifices made throughout our nation's history, and in honor of America's Gold Star families who've paid the ultimate price for freedom, I affirm my oath to "support and defend the Constitution of the United States against all enemies, foreign and domestic" and pledge to maintain and promote its standard of liberty for ourselves and our posterity. I further pledge and promise that I will stand firm in the fight to secure our Representative Republic and will do everything in my power to make sure America never becomes a Socialist country.

Moms for America is a national movement of mothers to reclaim our culture for truth, family, freedom, and the Constitution.   Kimberly Fletcher, is the president of Moms for America. She is the wife of a retired Air Force officer, mother of 8 children, author of "WOMEN: America's Last Best Hope", and contributing writer with Townhall.com.