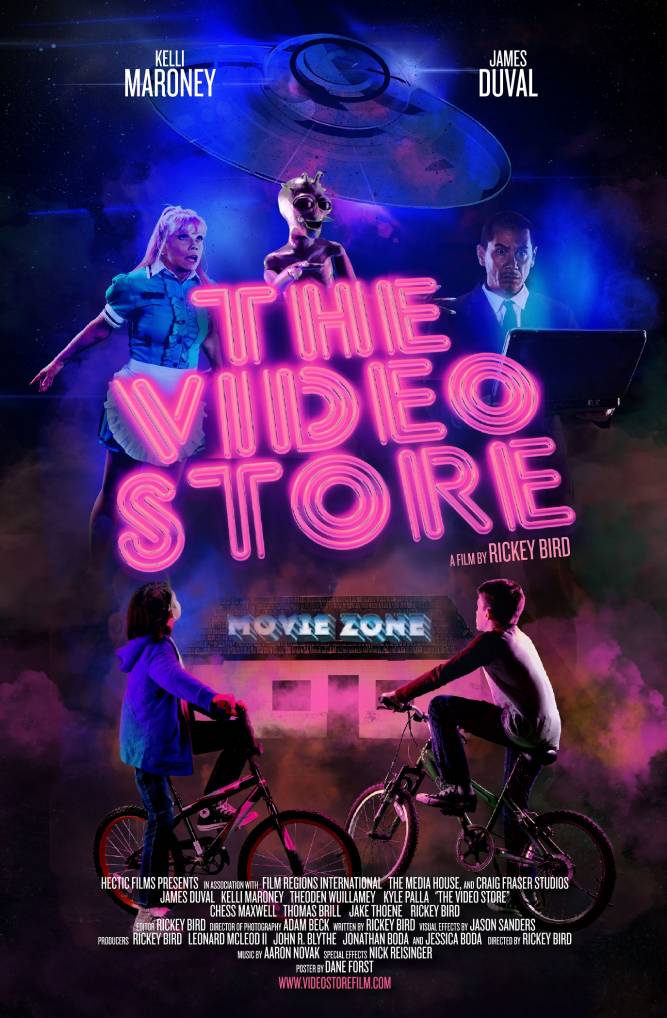 'The Video Store' from Hectic Films is now available for download and streaming at Vimeo
BAKERSFIELD, Calif. - eMusicWire -- Remember that plastic smell emanating from rows upon rows of videos at the local Blockbuster?

While most video rental shops have gone the way of the dinosaur, the classic video store remains alive in the hearts of many. One filmmaker is celebrating all things retro movie store in a new sci-fi film throwing viewers back to the classic 1990s alien invasion experience.

Set in 1997, "The Video Store" from Hectic Films stars James Duval (Independence Day) and Kelli Maroney (Night of the Comet), who find themselves locked inside the fictitious California video store Bird's Movie Zone. Forced to escape the locked store, they must figure out how to break into a back room to find a hidden key. The only problem: There's an alien in the back room.

More on eMusic Wire
While the plot hinges on surviving an alien invasion, the centerpiece of the film is a mostly forgotten relic in American history: the video rental store. All the scenes inside Bird's Movie Zone were shot at a recreated video store with close to 4,000 VHS tapes located inside Real Escape in Bakersfield.

"The set is full of nostalgia, with a payphone, a snarky video clerk, and that classic plastic smell," Bird said. "We are trying to keep the memory of our favorite childhood video rental stores alive."

According to a review from The Horror Society blog, the Video Store contains the excitement of Netflix' "Stranger Things" without dragging on unnecessarily.

"The vibe is the same, the themes are the same, the nostalgic value is definitely there and so is the primary villain," wrote reviewer Michael Therkelsen. "However, it's worth noting that writer/director/editor Rickey Bird Jr. pulled this off without copying."

More on eMusic Wire
"This film is a love letter to the 1990s Sci-Fi and the video store," Bird said. "Viewers will love the way we brought the local video store back to life while enjoying a fast-paced and suspenseful story."

The Video Store is now available for purchase on Vimeo at https://vimeo.com/ondemand/thevideostore.

Watch the trailer at https://youtu.be/laVq8TswwnE.

Fans can visit the physical shooting location and meet characters from the film at the Real Escape (6225 District Blvd #103).