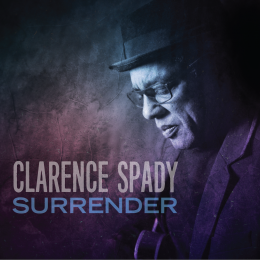 "Surrender" is slated for worldwide release on May 21, 2021.
LANCASTER, Pa. - eMusicWire -- Surrender, the forthcoming release from Clarence Spady, is a strikingly personal collection of nine tracks, including seven original compositions.  A retrospective of his life and career, this pivotal release bridges the challenges of a past plagued by addiction with the bright promise of a blossoming future.  A 12-page collectible booklet of musical history, photos and song information is included with each CD.  Three previously unreleased originals, recorded live at The River Street Jazz Café in 1999, concludes the album.  This glimpse into the dynamics of a live Clarence Spady performance whets the appetite for the return of live music that is emerging on the horizon.

"Taken as a whole, Surrender could be construed as a summarization of Spady's life ... the riveting contemporary blues guitarist never fails to satisfy when he gets inside a studio," notes music historian Bill Dahl. The title track, "Surrender," has received a silver medal in the Global Music Awards and is a current semi-finalist in the International Songwriting Competition.

More on eMusic Wire
"Surrender represents a fresh start for Clarence, both personally and professionally," notes label president Sallie Bengtson. "The support and recognition from radio, media, and fans in response to the first two singles has been outstanding and we look forward to sharing the complete collection."

According to Spady's manager Scott Goldman, "Clarence is thriving from the genuine connections and team support that surrounds him; from musicians to engineer to label, promotion, and management. These things along with the everlasting love of his son Khalique are inspiring him to write and develop more and more music. Surrender is just the tip of the iceberg. I know the world is going to love these songs and musicianship!"

To say that Surrender is highly anticipated would be an understatement. This triumphant release is only Spady's third in a quarter century. An exciting weekend of CD Release shows is planned on Friday, May 21 in Lancaster, PA (Stoner Grille); Saturday, May 22 in Scranton, PA (The River Street Jazz Café) and Sunday, May 23 in New York, NY (Terra Blues), conditions permitting.

Publicity and promotion by Blind Raccoon.