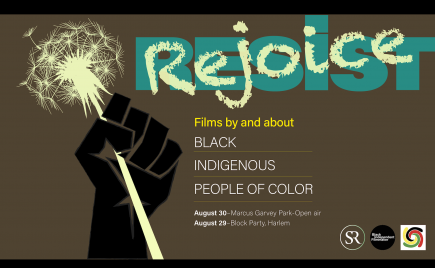 The second of the two events kicks off with a VIP cocktail honoring partners and sponsors followed by a FREE block party on August 29, in Harlem and a panel and FREE in-person film screenings at Marcus Garvey Park on August 30.

As part of the partnership, Rizzle is seeking submissions from BIPOC creators for content that reflects BIPOC and Black Lives Matter stories. Creators are asked to submit a three-episode series through the Rizzle app where each vertical video can be up to 60 seconds in length. Submissions must include the hashtag #SRFF2021 to be considered. The top five submissions will be screened on Sunday, August 29. The winners will receive cash prizes.

On August 30, an in-person panel will discuss the state of activism in the BIPOC cultures, and PBS's award-winning film The Neutral Ground - a documentary about memory, monuments, and breaking up with the confederacy will screen FREE courtesy of Black Public Media.

Films streaming online on August 31st, September 1st, and 2nd include a slate of award-winning narrative features, documentaries, and shorts by BIPOC filmmakers programmed in previous editions of SRFF (www.ratedsrfilms.org) and newcomers dealing with social issues relating to Black and Indigenous People of Color.

"This series focuses on stories by and about Black, Indigenous, and People of Color that deserve a spotlight of their own in the mainstream. It is important to point out that a rich cultural heritage lies behind the lenses of BIPOC filmmakers who have so much to give world cinema and activism." -Nora Armani, Founding Artistic Director SR Film Festival, NY

"Through the unfiltered truth of the powerful lens, Black cinema has not only been a window into our joy, celebration, and resilience, but it has also been a motivating agent for social justice by exposing the injustices that BIPOC communities continue to face. It is an honor to carry the baton of this tradition into the critical times of our present moment through communal work with our partner organizations." -Justin Thomas, Founder - Black Independent Filmmaker App

"ImageNation is thrilled to share resources to express what we have in common that outweighs our differences." -Gregory Gates, Executive Producer of ImageNation Film Festival

ABOUT SRFF
SR Socially Relevant™ Film Festival New York is one of the 100 best-reviewed film festivals on FilmFreeway.com. Submissions are now open for the ninth annual edition of SRFF which is scheduled to take place in March 2022. SRFF is a 501(c)3 non-profit film festival founded by actress Nora Armani in 2013. The Mission of the SR is to shine the spotlight on filmmakers who tell compelling, socially relevant™, human interest stories, across a broad range of social issues. The festival was created as a response to the proliferation of violence and violent forms of storytelling in media and entertainment. During its first eight years, the festival showcased over 500 films from 35 countries.