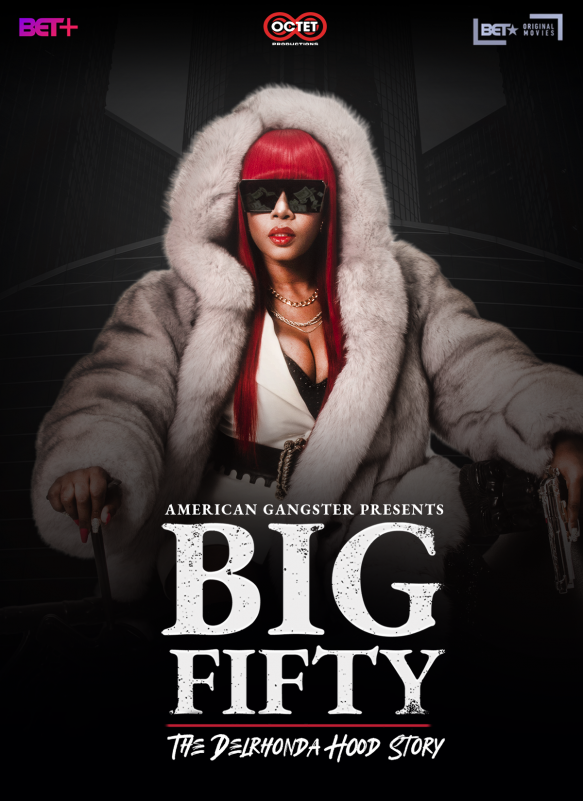 WASHINGTON - eMusicWire -- This real-life drama, snatched from the BET original series, "American Gangster, Trap Queens", tells the true story of the unbelievable life of Delrhonda Hood aka "Big Fifty". In her own voice, Big Fifty navigates the twists and turns of her fast-paced, dangerous journey that leads to the ultimate story of redemption. Hers is a story of a notorious American Gangster, which stems from the traumatic events from her childhood, and leads to a life of crime, violence and the repercussions from bad decisions.

The BET Original Film, "American Gangster Presents:  Big Fifty - The Delrhonda Hood Story", produced by Washington, DC based production company OCTET Productions.  The film has been selected as the closing film for the 2021 Hip Hop Film Festival and will have an uncut streaming premiere on BET+ Thursday, September 30th. BET and BETher will provide a sneak peek on Tuesday, October 5th immediately following the BET Hip Hop Awards, where a select few of the film's stars will present an award as well as the movie trailer, and then have the official network premiere on Wednesday, October 6th at 8pm EST.

More on eMusic Wire
Audiences will not only have the opportunity to receive Remy Ma as a talented, dramatic actress, but they will also hear her new single, "The Godmother", the title track for the film.  Starring alongside Remy Ma is R&B singer/actor Durrell "Tank" Babbs, Ta Rhonda Jones (FOX 's Empire), comedian/actress Pretty Vee (also making her theatrical acting debut and from Nick Cannon's Wildin' Out), Michael Anthony (Netflix's Raising Dion), Mike Merrill (CW's All American), film/television veteran Debbi Morgan (ABC's All My Children), Marquita Goings (BET's American Soul) and introducing internet sensation Rolonda Rochelle. This names a few of the amazing ensemble cast who worked under the guidance of Award-Winning Broadcaster, Producer/Writer/Film Director Russ Parr (35 and Ticking and The Bobby DeBarge Story).

To stay informed on OCTET Productions projects, visit www.octetproductions.com lead media Point of Contact for this advisory is Ms.Thomasina Perkins-Washington via phone at: 202.791.0980 or thomasina@capitolpublicrelations.com for any additional information. Press inquiries specifically for Remy Ma please contact Ms. Chanel Green via chanel@nottinghamla.com .

More on eMusic Wire
About OCTET Productions:  Founded in 2015, OCTET Productions is a full-service production company based in the District of Columbia.  With over 30 years of experience in the film and entertainment industries, our "OCTET Pretty" projects give OCTET the distinct advantage in setting the standard in the world of independent films.